At companies all around the U.S., you’ll find that many employees take time out of their busy lives to contribute time to local charities, communities or government. Some people might serve as a reservist for one of the military branches, volunteer at a local non-profit, work at a school board, or conduct another form of public service. At MedSource Labs, one of our employees, Mike Wenshau serves as Assistant Chief of Operations at the Hopkins Fire Department, which is a suburb of the Twins Cities in Minnesota. Mike, a native of Minnesota, spent a portion of his childhood in Texas and attended the University of Texas at Dallas. He spent part of his career working outside of Minnesota before returning to his roots years later. For the last 19 years, Mike has worked in the medical and pharmaceutical industries, but his life-long passion has always been a commitment to public service. He is also an avid outdoorsman and certified pilot.

We sat down with Mike to ask about his work as a local firefighter.

MSL: What inspired you to become a firefighter? 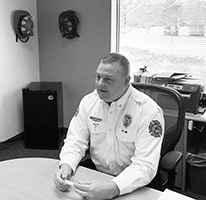 MIKE: Since I was a kid, I always wanted to do some form of public service. I grew up surrounded by family, many of whom served as either a firefighter or police officer. In fact, when I was really young, one of my uncles used to take me out on some calls when he was a firefighter in Bloomington, Minnesota. I witnessed first-hand how these firefighters worked so well together in different types of situations. Years later, when I attended the University of Texas in Dallas and studied sociology, I thought I wanted to become a police officer. But, after graduating from college and after serious contemplation, I decided to go down a different career path and became a sales manager for a Texas-based company. I then transitioned into the health care sector, which is a right fit for me, and working in sales gives me incredible opportunities to meet new people every day. Yet, that desire to serve in public service was always on the back of my mind. When I transferred to Minnesota for work, my life changed after I saw a great opportunity to become a firefighter, while also juggling my full-time job. I immediately took advantage of it.

MSL: How did you prepare yourself to become a firefighter?

MIKE: When I returned to Minnesota, my cousins were working at the Bloomington Fire Department and they told me that Hopkins was looking to hire new firefighters in the community that I lived in. My family knew this is what I always wanted to do. Of course, I knew what I had to do. So, I got into great shape, studied every firefighting book I could get a hold of and took the exam. I was pleased that I had passed it the first time around. I felt I was ready my entire life.

MSL: Could you briefly describe a typical day as a firefighter?

MIKE: It shouldn’t be a surprise that about 95% is boredom, which may involve routine chores and other critical maintenance to ensure we’re ready and prepared at any given time – day or night. And, that other 5% could involve any type of situation — it could be the birth of a baby or a terrible car accident. You don’t know what’s coming up and every member of that team must be fully trained and prepared to handle such situations. When that buzzer [alarm bell] goes off — you go, no matter what. For me, that’s one cool part of the job.

MSL: Do you remember your first call and what was it like?

MIKE: It was a long time ago and I don’t remember the call itself, but what I do recall is hearing that buzzer go off for the very first time and the adrenaline that rushed through my body. Generally speaking, you might not know exactly what you’re going to face until you show up on site. But, you know you’ve been trained to handle all situations. Over the years, you learn how to contain that excitement, because you realize that there are plenty of false alarms or other situations that aren’t critical or life-threatening.

MSL: You’ve mentioned training. How important is it for your job as a firefighter?

MIKE: Yeah, we train super hard – it’s a critical part of our job. That is the expectation for any firehouse around the country. We spend many, many hours per month training. I’m also on the HazMat Team so we have additional monthly training too. It kind of reminds me of my days when I played football. You know if a certain play is called, you know what to do on the field without any hesitation. The same is true for training as a firefighter. The muscle memory just kicks in and you know exactly what needs to be done when you show up at a scene.

MSL: Can you describe a very difficult situation that you had to deal with in the line of duty?

MIKE: It’s a tough question because there’s a lot of them. First of all, you have to have the right mind set and be prepared to handle tough situations – no matter what. It could be a hostile environment. That’s your job. With that being said, what I find difficult is aiding a victim as family members watch helplessly. Any bystander – family or not — acts differently and sometimes you have to help manage the atmosphere while taking control of the situation. It’s not always easy, but again this is what we’re trained to do. We’re also dependent and rely very heavily on other men and women in uniform. These police officers and other first responders are essential partners in our work. We all work together.

MSL: I’d now like to turn to leadership. As assistant chief of operations, what are some of the key traits of being an effective leader?

MIKE: I’ve always led by example – it could be as simple as the first one washing the truck or the first one getting into the car. Again, it’s about setting an example. Moreover, I used to be the guy on the hose line and busting down the door and stuff and I do miss that part of the job. But, as I now take command roles, it’s important that the junior firefighters understand that I used to be in the same role as them. You never forget where you came from and you understand where they are now. You also gain respect over time — it doesn’t happen overnight. As a leader, I am now more in a mentorship role and I want to make sure I’m bringing up the next generation of leaders who will someday take my spot. Hopefully, they’ll be even better than me at the end of the day. And lastly, I’d emphasis the importance of teamwork. While order and structure is always important to get the job done, collectively you’re working together as a team out there. It is important to me that everyone in our organization takes ownership of every aspect of the job.

MSL: My final question is what would you tell any young person interested in becoming a firefighter?

MIKE: For me, it’s probably the most rewarding thing I do in my life. I’ve put a lot into it but I get a lot out of it. It’s all about helping people. This has been my life-long desire – just follow your dreams.

Stay In The Loop

On #WorldHealthDay we celebrate nurses, midwives, and all healthcare workers who are at the forefront of COVID-19 response. We are grateful more than ever for the work you do to keep us safe and healthy. Learn more here
http://ow.ly/KdqM50z7LUD
#SupportNursesandMidwives